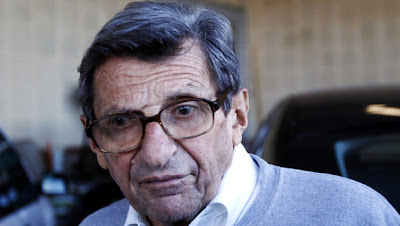 CBS - Penn State football coach Joe Paterno has decided to retire at the end of the season, according to a person familiar with the decision. The person said Paterno will announce his retirement later Wednesday. Paterno has been besieged by criticism since former defensive coordinator and one-time heir apparent Jerry Sandusky was charged over the weekend with molesting eight young boys between 1994 and 2009. Athletic director Tim Curley and vice president Gary Schultz have been charged with failing to notify authorities after an eyewitness reported a 2002 assault. Paterno has not been accused of legal wrongdoing. But he has been assailed, in what the state police commissioner called a lapse of "moral responsibility," for not doing more to stop Sandusky. He has been questioned over his apparent failure to follow up on a report of the 2002 incident, in which Sandusky allegedly sodomized a 10-year-old boy in the showers at the team's football complex. A witness, Mike McQueary, is currently receivers coach for the team but was a graduate assistant at the time. The coach defended his decision to take the news to his athletic director. Paterno said it was obvious that the graduate student was "distraught," but said the graduate student did not tell him about the "very specific actions" in the grand jury report. After Paterno reported the incident to Curley, Sandusky was told to stay away from the school, but critics say the coach should have done more — tried to identify and help the victim, for example, or alerted authorities.

Is anyone more untouchable than this guy? Even the fucking Grim Reaper told him he died about 16 years ago but this fucking guy just pretended to be on his cell phone or something to avoid talking to him. I mean he's basically getting run off campus by everyone but the students who apparently are cool with child raping and the guy just comes out after 5 days of quiet and speculation that he's finally leaving Penn State after 203 years and he announces he'll "retire" at the end of the season. HA! Fucking priceless. He's lucky he's not facing criminal charges, everyone who outranks him at Penn State (even though, c'mon who really does?) have already resigned and then there's this guy who still won't leave. Not even a resignation but a retirement at the end of the year, like he's still going out on his own terms. I seriously don't know anyone else who could possibly get away with this shit.

To be honest and not to get into the whole moral and ethical standpoint of the whole thing but to kind of get into it, I don't really see what he did wrong? He heard about it from some loser grad student who was probably eyeing up that defensive coordinator job down the line and he told the AD. I mean what else does a coach do? And it's not like the kid came in and told him that Sandusky had his left hand here, right hand here and all that shit - he probably just said he was in the room with some little boy and shit looked weird. I mean I'd probably tell my boss about that shit. Then they ban the guy from campus - not like Joe Pa could do anything else. I mean if he really didn't know specifics then this is all just following guidelines. "He should've tried to identify and council the kid" like what the fuck? What was he going to teach him how to run a belly option to the left side and adjust to a slant if they showed blitz? Give me a fucking break, the guy can't even tie his own shoes or voluntarily keep saliva in his mouth and he's supposed to council some 10 year old who got violated back in the day? Leave that shit to the professionals. If what he said is true and this pussy grad student didn't give details, then Joe Pa did the right thing in my book, follow the chain of command and tell your boss. Enough of this high and mighty shit - like anyone else would've done anything different.
Posted by RP at 11/09/2011 11:16:00 AM