First, Ryan Braun was somehow named MVP of the National League.
In most years, I would be cool with the Hebrew Hammer winning the award, but let's look at Matt Kemp's numbers this year:
HR: 39 (1st in NL)
RBI: 126 (1st)
BA: .324 (3rd)
Kemp was a handful of singles away from winning the Triple Crown on a team that would have sucked elephant balls offensively without him. James Loney served as his protection in the lineup. 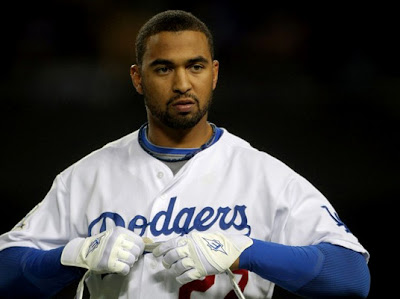 Plus Kemp banged Rihanna, which has to be good for at least a few votes.
The second fuck up of the day was when baseball announced its new CBA and limited the signing bonuses for guys drafted after the 10th Round to $100,000. Newsflash, Bud Selig- four years of college costs at least that much. Makes no sense to limit the spending like that unless you want to hand development of tomorrow's stars over to college coaches that have no incentive to make them better players and every incentive to abuse them for the good of their college teams.
Posted by WalterYego at 11/22/2011 10:55:00 PM