Can Someone Bankroll My Ass Already?! 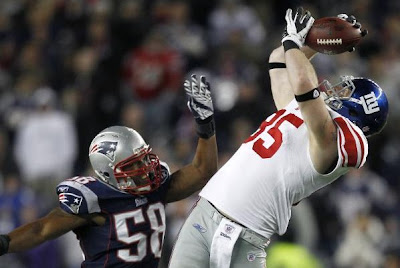 3-0 motherfuckers! Just like I said I'd do it. 4-1 including the WC picks that should've been 5-0 because honestly who the fuck catches a punt backpedaling onto your own 1 yard line in overtime and then break 39 tackles and run it back for a TD?????? Can't get started on that or I'll jump out of the window, fucking Patrick Peterson what an asshole. Anyway, for the meaningful picks I absolutely bossed it, combined with Mike's demoralizing week, that gives me a major jump in the standings.

What I said about the Giants/Pats game:

I don't like Brady and his nonchalant style in the pocket against this pass rush. That said, it could be one of two games. The Patriots come out and rip through the Giants poor rushing defense with another guy no one has heard of, or they try to shoot it out. Unfortunately for Brady, he's not playing Mark Sanchez this week, he's playing fellow MVP candidate Eli Manning and he's throwing against your 32nd ranked pass defense. I would love for this game to turn into a shootout, if it does, Giants should hang and stay close and possibly steal the game in Foxboro.

I don't think the Giants even got a good pass rush going during this game, I think the Patriots did a great job of protecting Brady, but the secondary played way over their heads all game and did a good job disrupting Brady's timing by getting their hands on guys at the line. Welker still had his 34 catches and all, but when it counted the Giants were up to the challenge of stopping Brady. Again. Took the over in this game with a ton of confidence, but it wasn't until the second half they started moving the ball on each other - but like I said the Giants should hang close and possibly steal the game in Foxboro and that's precisely what happened.

What I said about the 49ers/Redskins game:

I love Patrick Willis, which means I love San Francisco. I also hate the Redskins. John Beck vs. Patrick Willis? Yeah right. Like that's a question. Cannot believe this is only a 3 point spread. I'm all over SF here, their defense will put up more points than the Redskins offense.

David Akers 12, Washington Redskins 11. The Redskins are pathetic. The 49ers played like shit and still beat them easily. The score of 19-11 looks a lot closer than it is, a fluke TD at the end of the game combined with a two point conversion and it looks like this was a game, it wasn't. Patrick Willis 13 tackles, 9 solo, beast.

What I said about the Bengals/Tennessee game:

I love the combination of Andy Dalton to AJ Green, they look like they've been playing together for years. I like the matchup for the Bengals, they should win this game straight up.

AJ Green 7 catches on 7 targets. These two have chemistry just dripping out of their asses. The Bengals didn't do much but they didn't have to. Their defense held CJ to 64 yards as he continues to look more like Cedric Benson than Cedric Benson but Dalton threw for 3 TDs and has the Bengals sitting at 6-2 (4-1 on the road, dayum).

Baltimore (W) - I told Galt all week that Pittsburgh was not a good pick, and the Ravens helped me prove it by going into Heinz Field and sweeping the season series with the Steelers. Ray Rice dominating including a phantom hold by Torrey Smith which negated an opening grenade to the Steelers dicks 76 yard TD run. It's okay because after 7 huge drops that hit him either right in between his hands or right between the 8 and the 2 on his jersey - he caught the game winner.