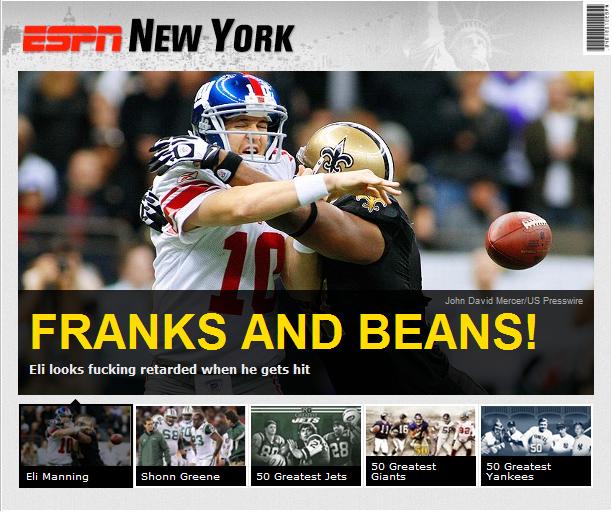 Could a simple headline do a better job of explaining what last night looked like? Didn't think so. Look at Eli's fucking face right there, he got smacked right into retardville. Not sure there's any coming back from that.

Look, it seems simple enough - Fire Coughlin already. Enough is enough, right? Sure he led the team to a miracle Championship over the 18-0 Patriots after a miracle run through the playoffs, but that's over now. It doesn't buy you eternity at the helm, maybe a couple years and that's it. Shouldn't be a couple years when all you're known for is second half collapses. I think this year he gets the short end of the stick, the Giants are absolutely decimated with injuries all across the depth chart and they're paper thin along important areas. They've been playing all season with Kiwi and a bunch of 6th rounders at linebacker, half the season without their defensive line on the field together, and half the season without their starting running back.

I don't know what people expected to come from this disgusting stretch of schedule, but I wasn't thinking shit would end pretty. I did say we would be able to hang and possibly beat the Patriots in Foxboro because I liked the matchup, and I expected the Giants to win at San Francisco - but I figured the Eagles would play them tough and thought there was really no chance they'd stop Brees and Jimmy Graham. Without a pass rush they should be 17 point underdogs at home to Green Bay, and without a defense able to stop the run DeMarco Murray and the Cowboys should steamroll their dicks off.

Bottom line is Coughlin's clock has expired. Sure it's been a rough season and the team did all it could, and it took care of the soft part of its schedule like a better than average team should be able to do (eh hem Redskins, Seahawks) but the fact of the matter is the players fucking hate him, plain and simple. They flat out just do not respond to him. That's the one thing I hate about the Jets, is their loud mouth fat coach, but you know what? He wants to fucking win, and he wants his players to fucking win, and his players fucking love him for it. They'd get into the foxhole with that guy and risk their lives for him, but the Giants would leave Coughlin crawling on the ground with his intestines hanging out and I'd be shocked if Antrel Rolle didn't run up and pop one in his dome piece before he ran out of there and left him for dead.

The Sporting News ran a midseason poll of 111 NFL players about which coach they'd least like to play for and surprise, surprise! First place honors go to Tom Coughlin , the most despised head coach in the league according to the poll. Some excerpts:

“Coughlin is that old school, Bill Parcells, my way or the highway type. He won’t bend at all. That’s not the kind of coach you’d like to play for.” —Bears DT Anthony Adams

“Looking at it from the outside, I don’t know that any player in the league would say they’d want to play for Tom Coughlin. I wouldn’t.” —NFC defensive player

I know this isn't college football, but what does that say about your organization? The NY Giants are always regarded as one of the classiest in all of sports and a benchmark of the NFL, you hear it time and time again through various news outlets - but WHO GIVES A SHIT! No one wants to play here!!!! When free agency comes, NO ONE WANTS TO PLAY HERE! Our best WR didn't even want to visit his own team during free agency! The last big time free agent to come here was Plaxico Burress, and we all saw how that worked out. It was like Rosenhaus completely lied to him about who the coach was and then after he signed was like "Oh yeah, about that...." because Coughlin and Plax fucking hated each other. His reputation around the league is ruining the Giants future plans and is ruining any prospect they have of landing quality players in free agency. New York itself attracts EVERYONE, everyone wants to play here in the bright lights and the big market - but Tom Coughlin and his hard ass reputation of being an asshole is enough to literally repel anyone decent from signing here, or they just go to the Jets instead because their coach has the exact opposite reputation. He's a loud mouth but will do anything for his players, and that's why Rex Ryan and the Jets land big names and gain interest from every FA out there. But fuck it, we'll just keep having guys walk during free agency and then sit on our hands while we sign NO ONE and just build through the draft. AKA letting 6th rounders and undrafted FA's start all season, and we'll be fine. Great fucking plan.

PS - THIS better be the next head coach of the NY Giants: 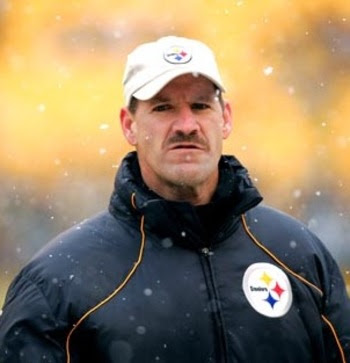