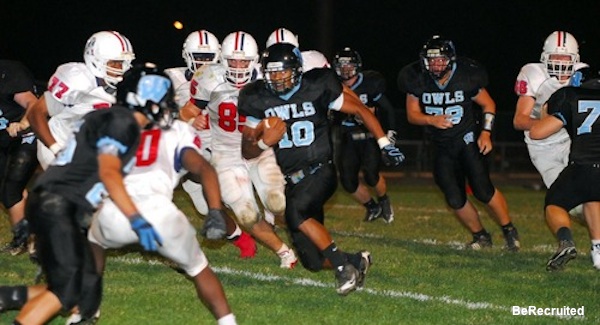 Yahoo - Westminster (Md.) Senior High finished the 2011 regular season with a sparking 9-1 record, replete with a string of seven consecutive blowout wins to finish the campaign. In those seven games, the Owls outscored their opponents by an enormous edge of 289-33. The penultimate victory in that string came against Manchester (Md.) Valley High, by a score of 57-7. Yet, technically, that game will go down as a loss, and a particularly costly one at that, because of what happened on their final drive. With the game already well in hand, Westminster coach Brad Wilson inserted a junior varsity player for the team's final offensive possession. Unfortunately, because that player had already competed in a junior varsity game earlier that week, he was technically ineligible to compete at the varsity level within the same seven-day period in accordance with a little-known bylaw within the Maryland Public Secondary Schools Athletic Association rulebook. That meant that the entire Manchester Valley rout was deemed a forfeit, with that loss bumping Westminster to 8-2, and out of the forthcoming North Region playoffs. Making the matter all the more disappointing is that Wilson went out of his way to ensure that he wouldn't be breaking any rules by playing the junior varsity star. Before the Manchester Valley game, Wilson asked his athletic director, Terry Molloy, if the player would be eligible to play. Molloy then consulted with Carroll County Public Schools supervisor of athletics Jim Rodriguez, who told the AD and coach that the player would be eligible.

Yo fuck this Rodriguez guy. Are all people named Rodriguez who are involved in sports complete assholes or is it just me? We've got this guy, A-Rod and Rich Rodriguez just dragging the Rodriguez name through the mud. How the fuck do you just tell everyone shit is all good when you probably were busy jerking off under your desk instead of actually making sure it was legal this kid played. If I was on this team I would be going absolutely batshit crazy. We run through the regular season on Madden Amateur level to make it to the promise land and we're booted because our 57-7 win counts as a loss? Yo F-U-C-K THAT. Absolutely no way that's acceptable. The coach did the right thing, he went to his higher ups, the AD then the fucking Carroll County Public Schools Supervisor for Tim Tebow sake and somehow it's the teams fault?? Just absolute horse shit. This should be a fucking crime, someone in that district is pussy fucking scared of this team and obviously does not want them in the playoffs stomping all over their dicks 57-7.

Also, who the fuck is this JV kid that it was so necessary he played 1 offensive drive at the end of a blowout game? What was the reasoning for that anyway? Is it Hershel Walkers son? What other reason could it be? All I know is, that kid better be starting for this team next year and better get drafted out of high school.
Posted by RP at 11/17/2011 01:40:00 PM