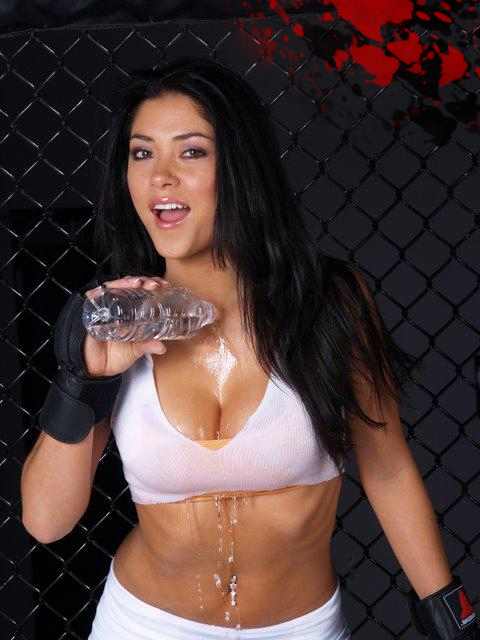 Las Vegas Weekly - Who are you pulling for in the Ring Girl of the year category?

"We only had one and that was Chandella [Powell]. The other was the IQ card girl. Arianny [Celeste] kind of walks around and holds up her latest test score. One time when there was a title fight, she got all the way up to five and we were very proud of her."

This move is so obvious it's embarrassing. There's only two possible reasons this nobody went out of his way to say something like that about Arianny. One: The classic approach every first grader uses to get a girls attention when he's in love with them, just make fun of them until they cry. Or Two: He stumbled up to her drunk at one of these Vegas parties and she shut him down and embarrassed him in front of everyone. Or both.

Frankly it doesn't even matter, this guy is outside of his mind for ever saying that shit in the first place. Two reasons. One: Now everyone thinks he's a gayball. Two: Every guy knows you WANT girls to be dumb as a rock. I mean for what reason would you need them to count to 5 for? No way you ever say "Hey toots, go get me 7 beers from the fridge", that's just irresponsible because no way they will stay cold outside of the fridge by the time you get to number 6. Fact. Nor do we say "Hey sugartits, go make me a sandwich multiplied by 80 divided by 40" no, you say "Go make me two sandwiches." Now if you add the words "STAT", "pronto" or "on the double" that's on you, you're gonna have to deal with the 3 and 3/8th sandwiches she comes back with.
Posted by RP at 11/30/2011 10:27:00 AM