Kevin Kolb Doing The Eagles Dirty And I Love It 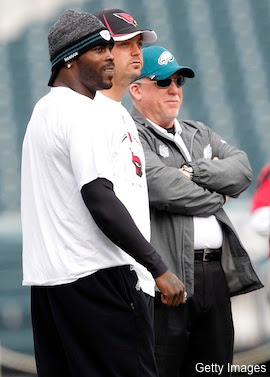 Yahoo - Kevin Kolb didn't suit up for the Arizona Cardinals on Sunday, but he played a key role in the team's upset victory over his former team, the Philadelphia Eagles. The injured Cardinals quarterback, who was traded from Philadelphia in the offseason, was able to recognize some of Michael Vick's(notes) play-calls during the game and relay that information to his defensive teammates. Kolb told 94 WIP: "During the two-minute drill, you almost feel guilty. Mike's sitting there giving the signals, and I'm standing there on our sidelines, screaming at our corners, 'Hey it's a go ball, hey he's running a screen, hey he's running a slant.' How much of an effect do I really have? I'm screaming to one guy. He may hear me, he may not. Luckily for us at that point, the crowd was pretty dead and some of our guys could maybe hear it."

I fucking love it. I mean how arrogant is Andy Reid? I mean he has every right to be, he's a proven winner. Just dominates the NFL to the tune of playoff collapses and zero Super Bowl's not to mention his doppelganger is a walrus. I mean if my kids were coke heads and sent to prison for being white trash drug addicts I'd be arrogant and cocky as shit also. I know if my starting QB from the prior season was coming to play my team, last thing I would think about is changing the QB's audibles and hang signals, no fucking way would that ever cross my mind. I'd just assume Kevin Kolb is an okay fella who would never try to gain an advantage for his 14 point underdog team, he'd just sit back and get embarrassed on his return trip to his former team, sure. 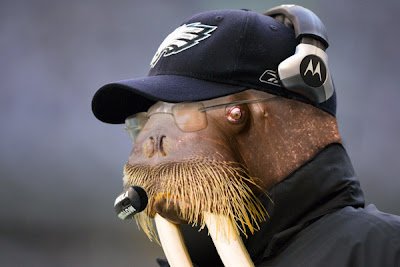