Eli Still Getting Absolutely No Credit 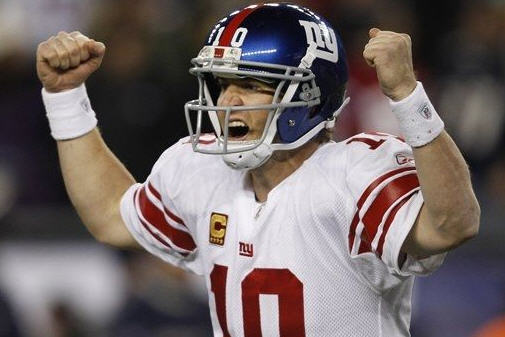 ESPN - Aaron Rodgers is the MVP, and it isn't even close. Last season was the first time there was a unanimous winner of the Associated Press's Most Valuable Player award, with Tom Brady winning all 50 of the votes. This year should be the second time. One of the main criteria for being an elite quarterback is consistency. Eli Manning has been consistently good this season late in games. He has five fourth-quarter comeback wins, two more than the next-closest quarterbacks, Cincinnati's Andy Dalton and San Francisco's Alex Smith. Sunday at New England, the Giants twice trailed the Patriots in the fourth quarter, and twice Manning brought them back. On third-and-5 at the New England 10-yard line, he threw a touchdown strike to Mario Manningham to take a 17-13 lead. After the Patriots scored to retake the lead 20-17, Manning led the Giants on an 80-yard drive in the final 90 seconds that included a huge third-down throw to Jake Ballard and a pass interference call against New England at the goal line. Manning's fourth-quarter numbers: 8-of-13 for 93 yards and two touchdowns.

Okay, so Aaron Rodgers leading the unbelievably heavily favored defending champions at full strength to an 8-0 start is MVP worthy - but a guy having an absolutely phenomenal career season leading a team that has taken mass casualties to key guys at key positions isn't even given more than "consistently good late in games"? How does ESPN let women write for them? This girl obviously never played football, and odds are she just gets her information from box scores - but if he's been only "good" late in games then the rest of the QB's in the league have fucking sucked. Newsflash toots, Eli Manning is fucking great in the 4th quarter to the point where he leads the league, and it isn't even close.

This guy gets absolutely no credit, but at least give it to him when it's due. Guy goes into Foxboro and beats Brady after telling the world he's in the same class as the guy. Well Eli was obviously wrong, because he was in a higher class than the Uggs poster boy yesterday. The thing I can't stand is Eli drives the Giants to two 80 yard TD drives in the final 3 minutes of the game on the road in a place no one has beaten Brady in the regular season since November of '06, and all people talked about was the one INT he had in the 3rd quarter that obviously has nothing to do with anything since it had no impact on the final score. Now Brady, Mr Fucking Perfect can't seem to do anything wrong. Guy throws 2 picks, loses a fumble but no one is talking about how shitty he's been playing. Head to head Eli has beaten Brady twice in a row, both on 4th quarter comebacks. So why isn't there more blame on Brady? Why isn't anyone asking if he just doesn't have it anymore? Maybe he's not so cool under pressure? Maybe it was the Gatorade Bottles Fault?


I don't know but this guy needs to start feeling the heat for once. Eli has taken so much shit over his career and he's still got that "Aw shucks gee willikers I'm just out there doing my best" attitude that might just be the best thing to have playing in NY when even when you win a Super Bowl in the most dramatic fashion in your 4th season and it doesn't mean shit because everyone still seems to hate you, best to just not give a fuck. I give Eli a ton of credit, had a terrible season last year with the 25 picks and I've said for a long time many of those weren't his fault. But living amongst the most arrogant and delusional fans I've ever dealt with, Jets fans, they continued pointing to that stat and how Sanchez will be better than him (absolutely hilarious) but I don't know if the Jets can just waltz into Foxboro without their #1 RB, #1 WR and starting center, and beat Tom Brady and the Patriots like it's no big deal. Eli never once said the INT's were anyone else's fault but his own, another thing I give him credit for - but he worked hard to overcome that, and half a season in - the guy has thrown only 6 picks. Brady has 10.

For a guy who had a ridiculously high QB rating in the 4th quarter, Eli's has actually gone up after yesterdays come from behind win against the Pats. It now sits a shade over 121, ten points higher than the #2 QB, Aaron Rodgers. You know - that guy who's the clear cut favorite for the MVP. I'm not gonna lie or pull punches here, there's no way Rodgers is a unanimous MVP of this league. He's a great QB - but he better fucking win with that roster. Eli Manning needs to be considered because just like his brother - if he's not behind center, this team might have 0 wins right now. He's carrying this team on his back right now, and he's proving to the whole fucking world he's ELIte like a motherfucker.
Posted by RP at 11/07/2011 01:35:00 PM