Finally, An Idea to Save the WNBA

Miami - Getting scantily clad women to play basketball while wearing stripper heels is either a shrewd business move in the face of the NBA lockout or a recipe for some very disastrous ankle injuries.

Regardless, the girls of Tootsie's Cabaret in Miami Gardens are going to give it a shot as part of the newly formed Rick's Cabaret Basketball League.
Tootsie's is a part of stripper/adult entertainment conglomerate Rick's Cabaret Inc., and the company has decided to take the lack of pro basketball (and possibly the success of the Lingerie Football League) as a chance to form the world's first professional stripper basketball league.

Holy shit. How did David Stern not think of this idea first? Leave it to Rick's Cabaret to come up with this goldmine idea. Fucking brilliant. Also brilliant, hiring this guy to coach one of the teams. 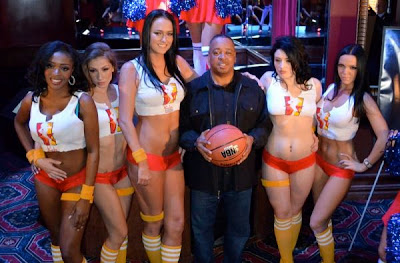 First Spud Webb, only a matter of time before they get Muggsy Bogues onboard
There is 10005% chance more than 11 non-lesbians would show up to watch strippers playing basketball.  Stern CANNOT say the same thing about the WNBA.
﻿
Vegas HAS to have a team, right? Sign me up for season tickets right now.
Posted by WalterYego at 11/29/2011 10:39:00 PM