We All Know The LIRR Sucks But You What Really Sucks About It? 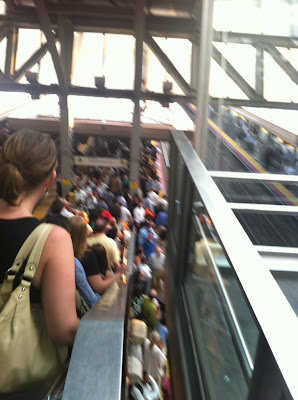 Everything. I mean there's just so much shit that sucks about commuting in general, that when you add absolute incompetence into the mix it becomes laughable. I always laugh when people complain about the LIRR, almost one of those "Well seriously what do you expect" kind of laughs. It's hilarious that we just accept the fact we have to hand over a fucking car payment each month to get literally nothing in return. Them fucking up has become so common that it's literally just expected. Like when that autobot comes on the intercom and give you one of those robotic messages and you hold your breath right at "The WEST-bound train to PENN station is operating.... (breath being held).... ON TIME" (exhale) and then you realize you have kind of a cold sweat and figure out that the little robot voice basically controls how the rest of your day is going to go. Well here's my list of things that suck about commuting on the LIRR:

5) The conductors - This one goes last because this is a half shitty half good thing about the train. There are those few conductors that have so much fucking pride in being a part of the LIRR you almost feel like they'd take a bullet for the train. They know every stop on every branch and every single transfer at Jamaica off the top of their head. They punch holes through one of those 8x11 tickets at about 16 per second. They sort of amaze me. Then there's the asshole conductors, the ones who tell you to take your feet off the seat or that you can't stand in certain area even though there's no where to sit. The ones who act like you're the biggest asshole ever for not having your ticket ready for when they come through. The ones who poke you to wake you up to show them a ticket that was easily visible to them but they won't acknowledge it unless you're awake? The worst.


4) The Getting To The Front of The Train As My Stop Gets Closer Guy - This one boggles my mind. It takes a certain balance of being lazy as fuck and then being way too dedicated at the same time. I tend to sit near the back or front of the train car instead of the middle so when someone walks into or out of the car, the door slamming shut is pretty infuriating after a while. There are people who are so lazy when they get on the train that they sit in the first car they get in which happens to be the back of the train. Then they wait until they're about 2 stops from their station and start a parade line to the front of the train. There's at least 10 of these people on my train on the way home each day. I don't know what's so hard about just walking up to the front of the train before you leave. Shit if I do it you know anyone can.

3) The Train That Makes Every Stop But Has Less Cars Than All The Other Trains - This one is another really big time head scratcher for me. I usually make a 6:43 train that makes only 6 stops before it hits Jamaica. It has 10 cars on this train and most days, there are 3-4 people standing due to lack of seats after we make the last stop. Now if I miss that train, there's a 7:00 train which is more into the peak rush hour traffic and this one makes 9 stops before it hits Jamaica. That's 3 extra stops during peak hours with 6 cars on the train. SO WE'RE ADDING 3 STOPS AND DOING IT WITH 4 LESS TRAIN CARS. That seems to make absolutely zero sense. This train looks like a fucking sardine can if I can imagine what that looks like but I'm just going with the expression about sardine cans because I heard it growing up and I'm assuming it means everyone is packed to shit inside a small area. People are getting on and not even bothering to look for a seat, got people standing in the aisles - like what the fuck is that about? Just switch those two trains, no? Common sense?

2) People Who Can't Wait For Their Stop To Stand Up And Wait For It - This coincides with #4 but not really. Instead of running to the front of the train, the people who stand up and literally get in line for when they can get out are real close to being #1 on this list. This is more annoying when it happens going IN to work. Here's what I mean, this is literally the last two days: 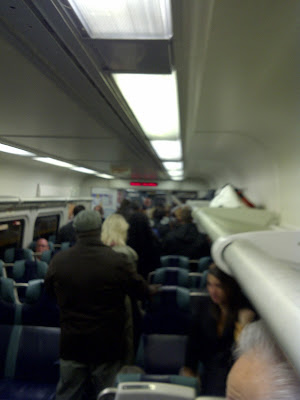 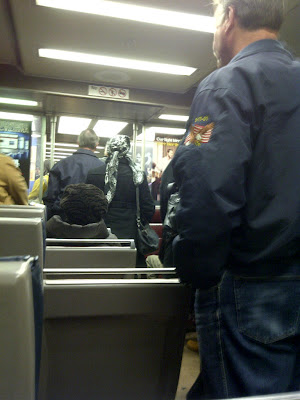 The train is still rolling and these people are lined up half way down the train. Why? What advantage could that possibly give you over myself who's sitting down comfortably waiting for the train to stop? I can't get enough of these people who think that somehow they're getting off quicker than I am. In the first pic, you see that last guy with the hat on? I get up when the doors open, walk backwards to the other door, get out and walk toward his door and walk past the door before he gets out. Great strategy guy, way to stand up and get in line. I don't get it. Not only is it 100% pointless, all you do is get in someones way who is sitting down. Welp now if they wanted to get up they can't because your fat ass is in their face. It makes people so uncomfortable, there's just no winning scenarios in this one. Are people that excited to get into work they can't sit still? I don't know - myself personally try to stay in a lazy position in my seat as long as physically possible, so to me I feel like staying in your seat until the last second is a huge plus - so standing in line dick to ass with people is the last thing I want to do.

1) The Buddy Groups - If you're a longtime reader you might remember when I mentioned how much I hated that obnoxious teachers were back on the train, well this rolls into that. People who save seats for other people like it was some sort of lunch table in 3rd grade. It's unreal. There are people who talk like they haven't seen each other in years meanwhile it's more like 24 hours since they talked about how their lives suck at home. It's pretty fucking annoying to see all these people with their 48oz. coffee's all wired and shit just screaming at each other laughing their fucking heads off while the rest of the common folk all want to kill them. I mean how oblivious are they to everyone else on the train? Oh that guy was sleeping when we walked in and took over? Oh well. Shit is unreal.

There are so many other annoying things about the train and commuting in general, but I just got real into another blog and feel like posting this already... If you got anything else leave it in the comment section and debate it up.
Posted by RP at 11/04/2011 09:02:00 AM