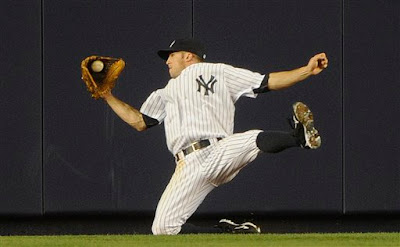 ESPN - While some thought Brett Gardner should have won the Gold Glove over the Royals' Alex Gordon, Gardner thought he could have done more. "It is what it is," Gardner said. "It is obviously something I would have been very excited about. I'll be honest with you, there are things I could have done to be a little bit better last year on that side of the ball. I made a few mistakes that were careless that I shouldn't have made." Gardner said his four errors were the most he has "ever" had. Gardner said he will resume workouts soon, but thus far has been trying to enjoy his time off. "It is one of those things, I wasn't expecting to come home this early so I just tried to enjoy some time off, relax and get ready to get started for next year," said Gardner.

If I put together the season Brett Gardner did in the outfield in 2011, I'd be going batshit crazy that there were no arrests made after I got robbed of the Gold Glove award. But I'm not as classy as Brett Gardner, dude is pissed but instead of flipping shit he decides he's just going to get better. Is that even possible? He already covers the most ground in the major leagues with the highest Zone Rating and was tied for the league lead in Defensive Runs Saved with 20. Can the Yankees just use 5 infielders and leave him in left center and Granderson in right center? Makes sense right? This guy is a beast in the outfield, and with all the shit that went on with Alex Gordon inexplicably winning the award so Kansas City didn't complain and finally quit Major League Baseball since they never win anything - I expect the next 10 years to see a Gold Glove with this guys name on it. 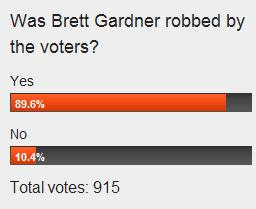