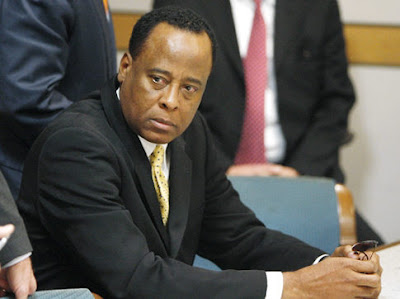 TMZ - Dr. Conrad Murray has been telling people who have visited him in jail ... he no longer has the will to live and he wants to kill himself. We're told Murray cannot cope with the fact that he was found guilty of involuntary manslaughter, and even though his lawyers told him he needed to be prepared for the possibility of a guilty verdict, it never computed with him. Sources tell us, Murray has told various people he wanted to kill himself, including baby mama Nicole Alvarez, his bodyguard Jeff and his lawyers. He's told all of them he's lost his will to live. We've also learned Murray remains in the medical ward at L.A. County Jail, which is where he's been for more than a week. Sources directly connected with Murray tell us he has no physical ailments and he is there because he's on suicide watch. Steve Whitmore, the spokesperson for the L.A. County Sheriff's Dept., tells TMZ they will not comment on why Murray has been in the medical ward, adding, "A person's medical or mental health status in the Los Angeles County Jail is protected under the law."

Am I missing something here? Didn't this guy just get like 10 minutes in jail for killing the biggest superstar the world has ever seen? Why isn't he jumping for joy? Seriously - he hasn't even been sentenced yet and the highest possible jail time he can do is 4 years. Plaxico Burress fucking shot HIMSELF and did 2 years! This guy killed MJ and might just get probation so this guy can cut the bullshit act about suicide watch. Dude is playing reverse psychology like a motherfucker. He's probably planning the biggest pill party you've ever seen when he gets outta the clink. Conrad is so full of shit it's not even funny - like he gives a shit he can't be a doctor anymore, fuck that. He's gonna get outta jail, write a book, and make a bajillion dollars off of the fact he killed a famous person and got away with it. Only in America!

UPDATE: Murray faces a maximum of 4 years in State prison, although he will never serve a day in prison because of a new California law. If Murray is sentenced to 4 years, he'll serve a maximum of 2 in L.A. County Jail, and he could be eligible for house arrest.