Are The Giants Becoming The Mets? 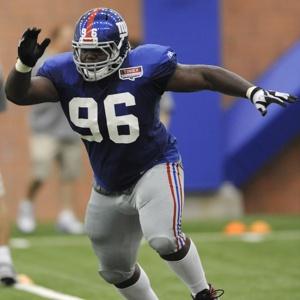 ESPN - In less than 24 hours, the New York Giants lost their most productive cornerback and leading tackler, an emerging backup cornerback and a promising second-round pick.

Cornerbacks Terrell Thomas and Brian Witherspoon both suffered season-ending torn ACL injuries and coach Tom Coughlin revealed that defensive tackle Marvin Austin will need season-ending surgery to repair his left pectoral muscle, which was injured during the Giants' 41-13 victory over the Chicago Bears on Monday.

"Obviously we are not in a great frame of mind today," Coughlin said in a conference call with reporters. "I feel badly for these guys and for our team."

Austin's injury came as a surprise and Coughlin said the 6-foot-2, 312-pounder taken in the second round out of North Carolina will have to wait until next season to play. Austin missed all of last season at North Carolina due to suspension over his alleged involvement in the NCAA agent scandal that rocked the school.

When asked if Austin's injury is a season-ending one, Coughlin replied, "Yes, I think this one is. Sometimes they (torn pectoral injuries) can be nurtured back to some kind of significance," Coughlin said. "But in his situation, playing where he plays and the degree of the injury -- he got caught with his arm out to the side which is the way it happens so many times -- the doctors decided that this requires surgery."

Seriously what the fuck is going on? Hurricane on it's way NY, Earthquakes are already old news here, I was early to work today, and the Giants are being picked off left and right. Monday the Giants lost two more DB's for the season leaving them with pretty much no one and now the promising and impressive Marvin Austin is out for the season with a torn tit. Can this guy catch a break? He gets singled out at UNC for illegal benefits when the whole world knows every D1 football player gets them (personally I think you should be suspended if you're not taking benefits). So he's been out of football since 2009 - finally gets a chance to play and his second preseason game he's done. Big gulps huh? Welp, see you in 2012 - if the world still exists.