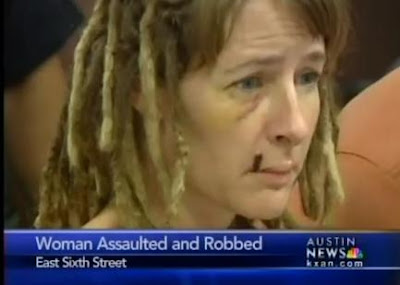 You know what type of people get knocked out from behind? The type that look like that thing in the picture right there and the type that go to Liberty Bar alone. Unfortunately for Merri here, she's workin with both deficiencies. I honestly don't know how this hasn't happened before. It's open and shut to why this guy did it, too. No way was this about money, if you want money this is not the type of person you look for. This was a crime of passion, a crime of straight up passionately hating your appearance - just judging a book by its cover like a motherfucker. I don't blame him, either. Merri if you don't like getting your neck cracked by a right hook, maybe do something with that mop on your head instead of hitting up Liberty Bar to suck a few warm beers down. ﻿And I don't know what she's saying with all that coward talk - I think you mean genius honey, because if you knew anything about anything it's that if the person can't see you coming it's a certified knockout 100% of the time. This is the perfect crime except he scouted the area 5 weeks too early, how was he supposed to know they put that camera in? Fuckin' clean blow to the face, too - sign him up! And don't even tell me she lost teeth, those were gone well before that punch landed. Fact.
PS - How hilarious was the half conscious attempt to reach for her purse? 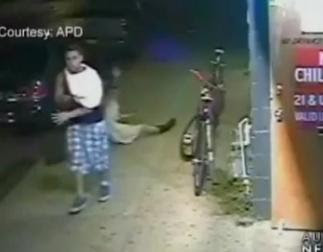