Welcome To The Team, Willis! 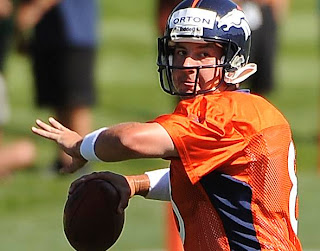 Denver Post - An odd scene out at Broncos practice today, where an incomplete pass in the end zone by Kyle Orton skipped off the ground and cracked the windshield of a Porsche in the player’s parking lot.


The Porsche, it turns out, belongs to running back Willis McGahee.

"Hey Willis, I'm Kyle, welcome to the team!" What a kick in the dick. How do you act after that? You're the new guy trying to fit in and your starting quarterback should've been traded months ago but is still there throwing missiles with no launch coordinates straight at your hundred thousand dollar car - what do you even say? Do you flip out or just try and be one of the guys who has billions of dollars and really doesn't care about it. Seriously, the only reason these assholes get mad about this shit is they don't get to go do whatever they want after practice, now they have to go out of their way to get something repaired for what amounts to maybe 2 pennies for them. McGahee probably had an entire afternoon of Xbox planned and now he only gets to play for 4 hours instead of 5. He probably asked Orton to pay for it and Orton told him to fuck off. How great would that be? "Fuck outta here new guy, Lloyd should've caught that shit go ask him to pay for it." It's stuff like this that break locker rooms apart. Denver needs to be careful, or they might implode and this could affect their season, maybe they don't get to those 5 wins they were aiming for.
Posted by RP at 8/26/2011 09:05:00 AM