BREAKING NEWS: BODEGAS SELL BEER TO KIDS BETWEEN 18 AND 20! 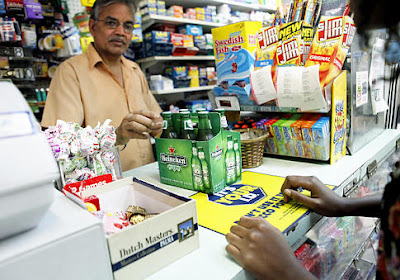 NY Daily News - More than 100 bodegas across the city were busted for selling alcohol to underage customers during a three-day sting by the State Liquor Authority.

The State Liquor Authority visited 212 stores beginning Monday, sending six young men and women inside while a state investigator looked on. At 123 of the undercover visits - or about 58% - the decoys, ages 18 to 20, successfully bought booze.

Michael Jones, head of the SLA's New York City office, said the investigation was part of an ongoing crackdown in neighborhoods where fruit-flavored alcoholic beverages are popular with kids.

Of the bodegas visited by the SLA, the Bronx had the highest citation rate. Thirty-eight of the 48 stores - about 79% - sold alcohol to underage spies in the borough. Manhattan wasn't far behind with 75% of the bodegas selling to customers under the age of 21.

HOLY SHIT NO WAY! These are the type of undercover operations that help me sleep at night! I can't wait to get a solid 8 hours in knowing these criminal kids aren't out at bodegas trying to buy some beer and fruity drinks! PHEW!!!! I mean forget about looking for drugs on every corner in the Bronx, let's look for kids barely under 21 years old with their magnificently articulated plans to finagle alcohol from the clerk who doesn't speak a word of English.
I can't believe things like this go on. Who needs undercover operations this thought out just to solidify the widely known fact that teenagers love to drink and party and try to get laid? Can't mess with history either, once you made that drinking age 18 back in the day it's embedded into everyone’s DNA - then they give it to their kids and they're programmed to start drinking at 18, simple science. It's no coincidence. Drop the drinking age back to 18 and all of a sudden we don't have a problem anymore. Boom, done. Solving problems left and right! Got a problem?? I'll solve it.
Posted by RP at 8/19/2011 11:19:00 AM