Is It A Turn On When Girls Are Into Fantasy Sports And/or Can Talk Sports? 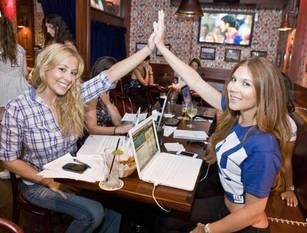 I honestly don't know how to answer this. Of course every man wants a girl who has some sort of knowledge of sports, but it's a fine line.. I definitely want the girl I'm seeing to know what the sport is that I'm watching. ﻿I mean, I don't want to turn on a football game and see Justin Tuck sack Tony Romo and her ask me if he just hit a home-run. Can't have that. We need basics at the very least. Now if you can tell me that you know certain players, we're on a good track. Can't take it when a girl has no idea who Derek Jeter is. Not only is he a 5-time champion and one of the most marketable athletes in the world, but the way he's banging everyone left and right odds are he's probably had sex with you so you should know his name.

So we have the right sport information, and some general knowledge of the players involved. That's it! Stop right there. Knowing more than that is weird. Means you either have 5 brothers and you're a gigantic man tom boy thing or you're a loser because you should be focused more on doing make-up and dressing barbies or learning how to cook or something.

Part of me wants them to know about sports and be able to really talk shit with about things, but what the fuck do you have guy friends for? That's the whole reason they're around in the first place, the only reason actually. They offer no other benefits other than talking about sports with them. They never help financially, they never clean or cook, they only steal shit you own and in most cases it's guaranteed to be a platonic relationship. I can't say all cases because if me and Tatum Channing ever sat down had some beers and talked sports who knows right? Never mind.

Bottom line, I think it's a turn on when the girl is genuinely into the same sports you are and you guys can actually chill and watch it together. If the girl is disinterested or overly into it, it's definitely kind of a turn off. Fine line, though.
Posted by RP at 8/27/2011 11:15:00 PM