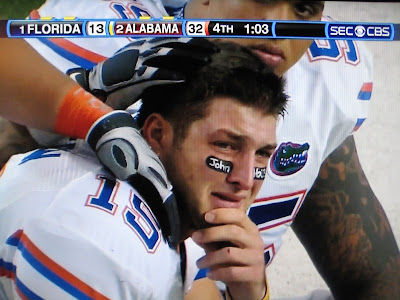 By Rick Reilly
ESPN - Randy Cross doesn't know me. Wouldn't know me if I stuck my thumb in his chili. So why did he just accuse me of being anti-Christian??

Two weeks ago, I wrote that Tim Tebow is not cutting it in the NFL. According to sources I quoted within the Denver Broncos, he is not within a plastic spork of cutting it. Doesn't mean he won't someday. It's just that right now, the thousands of guys wearing his jersey in the stands have as good a chance of starting as he does. Wasn't personal. I like the kid, just not as my quarterback. Or anybody's. Not yet.


Come again?
"People, especially the media, root against him because of what he stands for," said Cross, who won three Super Bowls with the San Francisco 49ers. "My personal belief is there are people in the media, people in the stands, who are predisposed to see a guy like that fail ... just because he's so public about the way he feels."
Now wait a damn minute. I've criticized Tiger Woods enough for 10 men. He's Buddhist. Am I anti-Buddhist?
Look anyone that knows me knows I can't stand Rick Reilly, just something about him and the way he talks pisses me off, just seems like a know-it-all smug asshole who name drops everyone famous he's "friends" with. Depending on the number of stories he's written about a person or how many times he's interviewed someone determines how close they are or something. I don't know it's weirdo shit. But enough about him.... Reason I say that is I completely side with him on this one. For different reasons.

Obviously Randy Cross is a moron, I don't watch football on CBS strictly to avoid the chance he's broadcasting the game. Holy shit he sucks. I'd rather listen to Iron Eagle, nothing like TV names huh Ian? But he's an idiot for even mentioning this when he publicly blasted the most flamboyantly open Christian and author of the greatest play in Super Bowl history (and if Steve Sabol says it's the greatest play in Super Bowl history, you can take it to the bank). So how do you tell this guy he's hating Tebow because of his religion?

Fuck that, listen to this, Tim Tebow sucks. Like what is it about these people? They're so in love with this guy that they're blinded to the fact that he literally sucks at his job. The guy can't do anything wrong it's insane. And apparently he hates it. I wonder if he shows up with tats everywhere, sluts hanging out with him at 4am taking videos of them sucking his dick and posting them on Twitter just to shake this goody tooshoe image. Like he's gotta be sick of this shit by now right?

By the way how the hell did the Broncos take him in the first round? What a joke. "He's a hard worker, real leader.... He's a winner." Fuckkkkk that. You need talent, first round talent, need to be soaking wet dripping with black athlete talent. This guy won in college, wow fucking awesome. So did Ron Dayne and Rick Mirer and shit, what does that prove? What a stupid first round pick. The Broncos wanted the pub, they wanted the money Tebow would make them, they had no intention of playing this guy. They did last year because everyone in the immediate Denver area was on injured reserve and they needed someone to fill the spot and they figured they were already paying him 1st round money might as well let him absorb a few hits.

I get it, he's a nice guy and it's hard to tell someone that nice that they're not good because you know he'll respond with "Well I understand, and I'm not perfect, but I strive with the Lord to make myself better every day and I will promise to you to get better and become the best I can be." But there is when Denver has to be like "Yo guy, shut the fuck up, we're telling you that you suck stop being so nice. You didn't make yourself better, and you're not going to be playing quarterback for us." Either that or burn a bible in front of him or something so he wakes up.

And I disagree with Reilly on the religion thing. I think he does shove this shit down our throats, nice eye black bro - no one fucking cares you love God. That shit is so fucking obnoxious I can't even take it.
Posted by RP at 8/27/2011 08:09:00 PM