So Steve Smith is Kind of an Asshole Huh?

Look I haven't read any articles on this, haven't done any research - all I saw was a quote from him saying something along the lines of "I just don't think the Giants could offer me as much money as the Eagles". Is this fucking guy serious? I get it if you're deciding between 3 teams on a long term contract and they're all trying to suck you off and throw hookers at you to come play for them, but you signed a fucking 1 year contract. Is he even playing this season?? This guy is only 9 months removed from micro-fracture surgery and he thinks he deserves a raise for the half a season he's going to put in?? Some fucking balls man. Everyone was up in arms over Shaun Ellis going to the Pats after 11 seasons - well sorry to tell you, Shaun Ellis is not Steve Smith. Steve Smith was a fucking game changer for the Giants, without him the offense is officially fucked. Sure everyone can keep saying "we got guy and they'll step up" yeah with the whole 10 days of practice before the season starts, sure. Look, Boss was bad, but this is very really extremely bad. Worst case scenario and the motherfucker chooses Philly. The fucking team he was just talking shit about on Twitter no more than 2 months ago. I know football is a business, but this shit is a slap right in the fucking face of the Giants. Go fucking cry about how they didn't want you as much as the Eagles, sorry they didn't get down on their knees and bow to you when you decided to "visit" your own fucking team. You're the one who made it seem like you didn't want to be here, so don't give me that baby shit. I didn't think I could ever hate Steve Smith especially after he swagged out on those Karako commercials and I also didn't think I could hate the fucking Eagles more than I do - but both just happened. 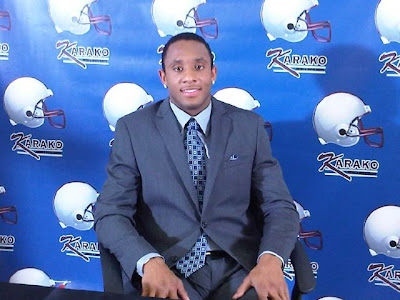 PS- Just saw a quote saying he thought the Giants COULD match the offer the Eagles made, soooooo that makes this even worse right?
Posted by RP at 8/11/2011 01:53:00 PM