In truth, I was only able to watch a little bit of this game and couldn't hear the announcers, although if Greg Buttle was working the microphone, that's a good thing.

-The 17-3 score was not really indicative of the game. The Jets second and third stringers put up 10 points in the fourth quarter to put the game out of reach. However, the Giants offense moved the ball on the Jets despite only putting a field goal on the board, and the Jets starting offense didn't impress.

-The Jets will be in trouble if they continue to employ the bend-but-don't-break defense. They took advantage of two Eli back-pedaling interceptions, but could only bring pressure on the quarterback when they sent extra defenders on the blitz.

-If the Jets linebacking corps of David Harris / Calvin Pace / Bart Scott / Bryan Thomas isn't the best in the NFL, it is definitely in the top three. 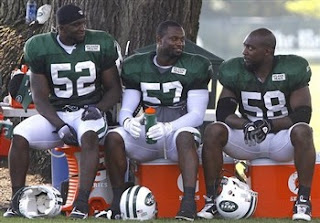 -I hate Eric Smith playing special teams in a preseason game. More people get hurt on kickoffs than on any other play in the game. Use some backups trying to make the team instead of your starting safety. The secondary is thin as it is; no need to risk an injury. It's good to have a short memory in this game, but it's dumb to forget Jim Leonhard's injury late in 2010 exposed a team weakness.

-Mark Sanchez threw for only 64 yards on 16 attempts while playing in seven series-es-es. I thought JaMarcus Russell was out of the league. He needs to improve. Plaxico Burress is 6 foot 15. How can you repeatedly overthrow this guy?

-If Shonn Greene wants to be an elite back, he needs to be more consistent. He had a drop on the first play from scrimmage that is unacceptable.

The Jets can be an elite team but they'll need to be more consistent in almost every facet of the game. B effort from the defense, C performance from the offense won't get it done in the AFC East.