From the visitors bullpen at Rogers Centre in Toronto, an American League pitcher screamed at Blue Jays right fielder Jose Bautista as he took his position late in a game in the spring of 2010.

The enraged player and his teammates could hardly believe what they had seen in the previous inning. As they sat on the perch above the right-field bullpen at Rogers, they caught sight of a man dressed in white about 25 yards to their right, out among the blue center-field seats. And while the players watched, the man in white seemingly signaled the pitches the visiting pitcher was throwing against the Jays, according to four sources in the bullpen that day.


I couldn't love an article more than this one because I fucking hate Jose Bautista. I've been screaming about this since last year that this guy was the biggest fraud I'd ever seen. I still couldn't figure out why anyone pitched this guy inside when he couldn't hit a ball the other way if his life depended on it. And the fact that he sucked his entire career and all of a sudden was a mega superstar literally out of no where. SOMEONE EXPLAIN THIS TO ME: 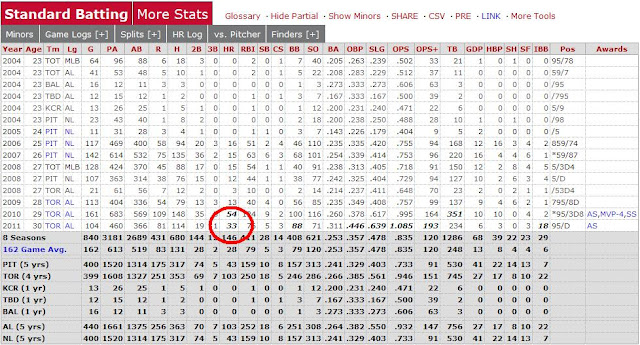 60% of this guys homeruns in his 7 year career have come in the last year and a half?! Is this serious? How is this not a bigger issue? We jumped on everyone for steroids so there has to be an explanation for this. Guy averages 12 HR's a season and all of a sudden strokes 54?! Now leads the league in HR's again? No one wants to ask why?? Ohhhhh because he's cheating! Of course. I mean it's so obvious no one was going to ask, they just knew. I figured that until he set a record for votes for an All-Star Game - pissed me off more than LeBron going to the Heat. I think this is worse than doing steroids. At least you still have to hit, this guy was taking BP in live games knowing what pitches were coming and shit. What a fraud. I've said it since last year, this guy fucking sucks and this confirms it. Just look at his career then look at the last year and a half it's like he went to game settings and dropped it from All-Star to Retard level and is just bullying the video game to death like I do when I play Madden. Listen I get it, it's a lot more fun to win 77-0 then struggling, sweating and throwing controllers for 3 hours just to lose. But Bautista is doing this in real life, like a scumbag. Why'd the first 6 teams you played for drop your ass? Because you suck. Let's change that by getting someone to tell me exactly what's coming and cure all my problems of being a bad hitter.