Mike Smith had his franchise quarterback Matt Ryan attempt 42 passes in the first half of a preseason game against the Pittsburgh Steelers, aka the best defense in the league. Crackhead, just because owners charge the same price for a ticket to a preseason game does not mean the game actually means anything. 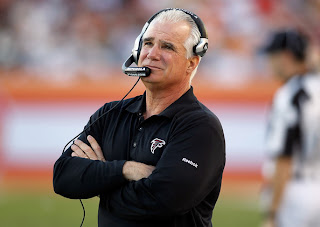 If players are drug-tested, shouldn't this guy be too?