Yahoo - "Pretty much every reporter, 'Will he be back, is it possible to come back and do what he's done?''' Jones-Drew said. "A lot of fantasy football gurus who have never stepped on the field before or ever been in the locker room, they know the best about football."

You'll recall that Jones-Drew played with a meniscus injury for 14 games in 2010 — exiting in the fantasy playoffs, thankyouverymuch — and his recovery remains one of the league's key preseason storylines. The man topped 1,300 rushing yards in each of the past two seasons and he's averaged 12 touchdowns per year throughout his career. A healthy MJD would be a top-five pick in any league, no question. Injury worries have bumped him down the draft board this season, but he'll obviously climb if the practice reports remain positive.

This is actually pretty hilarious to me. I can sit here and bash on MJD for worrying about things that he really shouldn't worry about - but I always wanted to know if these guys really gave a shit about nerds (like me and everyone else reading this) who play fantasy football. Remember when MJD took a knee against the Jets at the 1 yard line instead of running in for the TD with the clock running out? So how is anyone supposed to know this guy all of a sudden cares about where he's being drafted right now? Look, in our February Fantasy Draft, I got MJD in the 2nd round. I thought it was a steal and MJD thinks so, too. After hearing him go off on how disrespected he feels about dropping out of the first round, I've got to expect big things from my boy this year with this chip on his shoulder. I mean Osi Umenyiora can't get motivated to practice with millions of dollars of incentives being dangled in front of his greedy face, but MJD just needs a little fantasy football reality check to get him motivated to hang 14 TD's this season. That's what kind of guy I want on my squad and in my locker room! 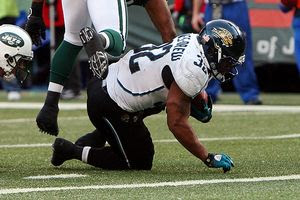