I normally complain about a lot of random things that tend to piss me off, I feel like if I do that it releases any tension that the situation created in the first place - but one that has been a constant over the last few weeks has been bikers. I'm not talking about motorcycles and guys rocking Harley's and shit, even though they're annoying in their own right going 0-60 from stop sign to stop sign trying to set off car alarms - but asshole people on bicycles. Now there's two kinds, there's the casual bike rider who really has no care in the world for anyone but themself and if they happen to mow you down because you're in their way, so be it. As long as they didn't have to give you any warning while riding the bike straight up your asshole it's all good for them. But there's a new kind of these people now.... Bikers who text. Now driving and texting is one thing, people can handle that.... But biking and texting? Like these people are nuts, right? Staring downward as they go bearing down on a tree. Newsflash nerd, that tree is not moving, might want to look up and use both hands to swerve out of the way of that immovable object. 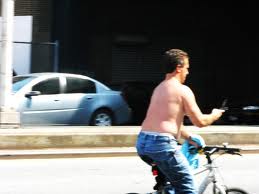 Sidenote: I went for a run yesterday for like 4 minutes and saw some kid on a bike eat shit in his driveway, helmet flew off and everything - funniest thing I've seen in a long time - now not only could I not breathe from running but also from laughing, great workout.

But hold on there's another kind, the spawn of the Lance Armstrong generation who think biking is a sport and requires the tightest and brightest of clothing man could ever assemble. People with their $3,000 bikes, rearview mirrors on their helmets, giving directional signals properly with their arms even though no one in a car knows what those things mean. They literally take over the road, don't even bother trying to pass a group of these people in your car or helmets start flying off your windsheild. I mean you think you kidnapped their child the way they act if you dare pass them for going 20mph on a busy road. What were you thinking? You go 19mph while we take up the entire road because we're sporting on bikes right now, it's not a game. 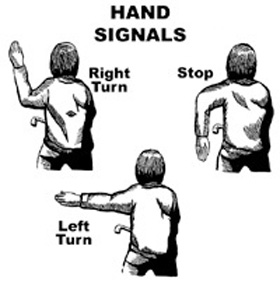 Kind of envy this guy, not the jail thing he probably had to deal with, but might've been worth it: 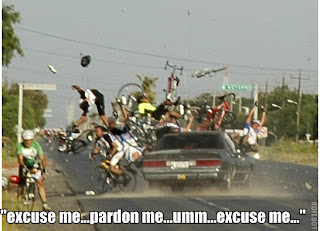