Murder Your Own Baby; Kill A Guy With Your Bentley While Hammered Drunk and High as Shit; Steal 7 Cents -- 2 to 6 years, 24 days, Zero Jail Time -- Match 'Em Up

Okay let's break down our justice system here. I'm going to give you 3 cases, you pick which jail term best describes the crime.

Our jail sentences are:

1) Mother murders her own baby, tries to cover it up, goes crazy person in the middle of it, makes up 9 stories of her own accounts of the incident, then stops speaking altogether.

2) Guy goes out to a club, openly drinking until 4am, drives home. Gets hungry so goes to drive to the diner, ends up blasting a guy who was on his way to work. Guy, dead. Drunk driver completely fine.

3) 15-year old kid beats up an old guy, steals 7 cents from him. Pleads not guilty and attempts to fight the charges. 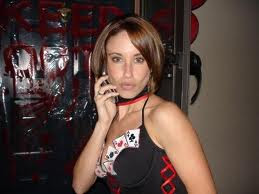 ABC - Casey Anthony has been found not guilty of murdering her 2-year-old daughter Caylee. The jury declined to convict her of either first degree murder or manslaughter.

Instead, the jurors found Casey Anthony guilty on four counts of providing false information to law enforcement, which are misdemeanors.

This is kind of obvious, but will make more sense later on. This was obviously horse shit, jurors taking their jobs wayyyyyy too seriously. "Well I know you guys proved your case like 99.9% but there was still some reasonable doubt which according to the law kinda like equals not guilty" (say that in some bitchy snobby white girl voice while she's chewing gum because that's what I was aiming for and it will sound better). Like c'mon jury, not about you here. Get that crazy bitch off the street unless she's going to do that porno I keep hearing about.

2) B. 24 out of 30 day jail sentence in county jail. This sentence goes to Donte' Stallworth. 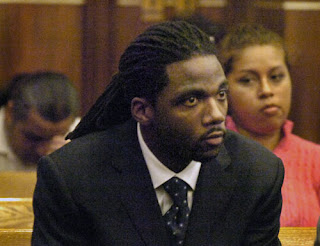 Details in this one are a hoot:

ESPN -
Cleveland Browns wide receiver Donte' Stallworth was charged Wednesday with killing a pedestrian last month while driving drunk after a night out at a swank South Beach nightspot.

An arrest warrant charging Stallworth, 28, with DUI manslaughter was filed in the March 14 accident that killed 59-year-old Mario Reyes.

Stallworth's blood-alcohol level after the crash was .126, well above Florida's legal limit of .08, according to results of a blood test. Stallworth will also be charged with DUI, which carries a possible six-month sentence plus fines and community service for first offenders.

Hilarious. Thank God we threw in the point he's going to have to do community service for driving under the influence. Focus on that, not the guy he killed.

"I hit the man lying in the road," Stallworth told officers arriving to investigate the crash, according to the affidavit. One officer smelled alcohol on Stallworth's breath and said that his eyes appeared bloodshot and watery.

Hit the man lying in the road?? So this guy was so tired after work he just decided to stop drop and roll in the middle of a highway? Yeah I guess when you've got alcohol spilling out of your mouth that reasoning sounds about right in your head.

The report also quoted Stallworth as saying he flashed his lights at Reyes in an attempted warning and that Stallworth was driving about 50 mph in a 40 mph zone.

OOOOHHHH okay, phew, he flashed his lights. Hey dickhead, in the time it takes me to think about possibly flashing my lights at a guy crossing in front of my car - I've already braked and honked my horn. Flashing my mute deafly quiet lights might be #12 on the "Before You Hit Someone In The Road" checklist.

#3 Turning the wheel in another direction to avoid the human being.


USA Today -
Browns receiver Braylon Edwards spent more than $3,400 on a bar tab when he was drinking with Donte' Stallworth the night the latter struck and killed a pedestrian in Miami.The AP reports that Edwards enjoyed drinks with Stallworth, his Browns teammate, at a poolside bar before meeting at a nightclub later in the evening. Edwards spent $3,443 at the club -- $1,500 on Perrier-Jouet Rose champagne and $695 on Grey Goose vodka.

Stallworth paid $375 for a bottle of Patron Silver for Edwards' table and $90 on five shots of tequila.


Damn, what kind of life is it when you can just drop $90 on 5 shots like it ain't no thang? Must be fuckin' nice. Also must be nice to just slam into people when you're drunk and get only 24 days in jail - fuck life would be awesome. 24 days in the penalty box for murder, sounds right.

Yahoo! - A 15-year-old from Syracuse, Anthony Stewart, was sentenced to 2 to 6 years in a juvenile detention facility by Judge William Walsh of Onandaga County for a robbery in which the teenager took a mere 7 cents.
Walsh said he issued the harsh sentence because Stewart declined to plead guilty, choosing to fight the charges. A jury found him guilty of first degree robbery.
The victim had identified Stewart and a friend as the perpetrators, Walsh said, "and yet you still denied it," the Post-Standard newspaper of Syracuse reported.
"Well, that cost you," Walsh added.
The other teenager, Skyler Ninham, 16, pleaded guilty in July and was sentenced to 1 to 4 years in prison.
Stewart and Ninham carried BB guns that looked like real pistols when they knocked a 73-year old man to the ground--Stewart punching him in the face--and took all the cash he had on him, prosecutors said. That amounted to 7 cents.
Stewart's lawyer, Laurin Haddad, had pleaded with Walsh to treat her client as a youthful offender, so that a felony conviction wouldn't remain on his permanent record.
"For 7 cents, now you're making someone a felon for the rest of his life," Haddad told the Post-Standard.
Classic case of racist old white cracker judge vs. young gangbanger just tryin' to live. "Well, that cost you" has to be the most condescending after-the-verdict comment I've ever seen. Like way to rub it in, dickhead. You just made this kid a felon for the rest of his life for taking 1/3 of the money I used to get for losing a fucking tooth as a kid. Not only that but he did it with a fake gun. What was a 73 year old gonna do with 7 cents anyway? Probably buy something that would rot his teeth and his mind, kid did him a favor. How about his boy getting 1 to 4 years in prison? Holy shit can we get an appeal on this or were the lawyers in on this shit too? Probably couldn't afford a lawyer (and I've gotta assume that since they're out on the streets stealing pennies) and they gave them two of the most crooked racist lawyers Syracuse has to offer. And I'll bet they have a real nice pool of crooked racist lawyers to choose from. You ever been in that county? Shit, I went to school up there and I can tell you - the population and total number of teeth pretty much equal out.
Cracker Racist Judge: 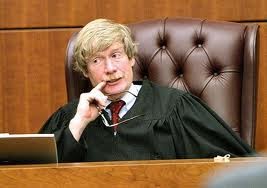 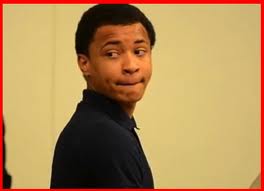