Guess We Can Credit Teddy Roosevelt For Saving Football


[Roosevelt] convened a White House summit with football’s leading coaches and thinkers; even Elihu Root, the secretary of state, attended. Miller argues that this was the moment when Roosevelt put his stamp on the sport by imploring the men to crack down on dirty play and reform the way the game was coached. With Roosevelt’s encouragement, Miller says, a series of rules changes was set in motion — among them, increasing the number of referees and strengthening penalties for unsportsmanlike conduct — that ultimately quieted the critics enough to allow the colleges to play on.

Okay so apparently Teddy Roosevelt carried a big stick and went to battle with everyone on the planet just dominating other countries leading the USA to a #1 world ranking, but couldn't take watching guys tackle each other on a field of competition? Doubt it. There was obviously some chick he was trying to bang so he tested out this sensitive guy move and I'd say there's no doubt about it that he sealed the deal. Seriously though, has anyone ever seen highlights of football in the 50's, 60's and 70's? It was like jailyard "if you're not dead it's not a penalty" type of shit. Dick Butkus straight up ripping peoples heads off for trying to gain yardage. The Raiders were pretty much like the Bengals of today except they commited their crimes on the field in front of 60,000 witnesses but instead of jail they went to the Hall of Fame. So my immediate thought was - how fucking bad must it have been if football had to be "saved" when Teddy Roosevelt was still around? Did they carry weapons, too? Because Teddy was no pussy, if he said it was rough - I've got to believe it was pretty rough. Oyster Bay don't breed no liars. 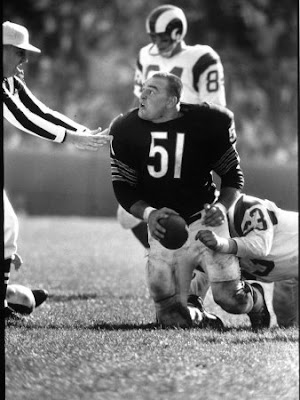