Chinese Try And Cheat; Big East Will Have None Of That 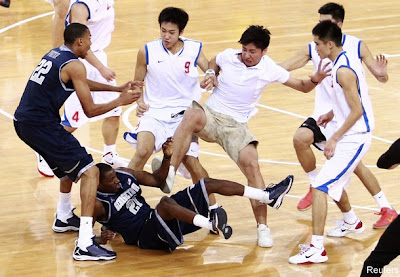 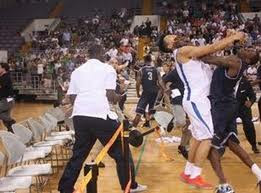 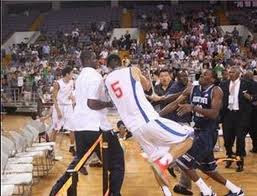 ESPN - Georgetown's tour through China turned ugly Thursday when a game between the Hoyas and the Bayi Rockets, a Chinese professional team, ended in a bench-clearing brawl.

Mex Carey, Georgetown's sports information director, told ESPN.com that the game was "very physical," with 57 free throws taken by Bayi to just 15 for Georgetown, and quickly spun out of control.

According to the Washington Post, coach John Thompson III pulled his team off the court with the score tied at 64 midway through the fourth quarter after the teams exchanged punches. One Hoyas player, Henry Sims, was reportedly hit by a chair.

The Hoyas dodged water bottles and other objects thrown from the stands as they made their way to the locker room. Carey said one Georgetown fan in attendance was knocked to the ground after being hit by a bottle.


So much for a friendly exhibition game, huh? Simple lesson for China here, you don't bring in a Georgetown team then pay the refs off or actually tell them you'll murder their families if they don't give you all the calls and make it the most lopsided game ever and expect a Big East team not to woop your asses once you start getting frustrated that they're still beating you even though you've taken 42 more free throws than they have. Just not going to happen. But then once they stand up to your communist asses you've got team managers in their ping pong uniforms running onto the court stomping on people. Typical. Shit couldn't be more unfair and still the Big East represents and gets out of there with the game tied, I mean they left alive yeah so they're all okay that's important right? Whatever. I know they're out numbered but someone needed to send a message and drop one of these Chinese idiots, I would've heat seek missiled that ping pong player as soon as I saw him come off the bench trying to step on people, intercept him and flatten his face! Had to.