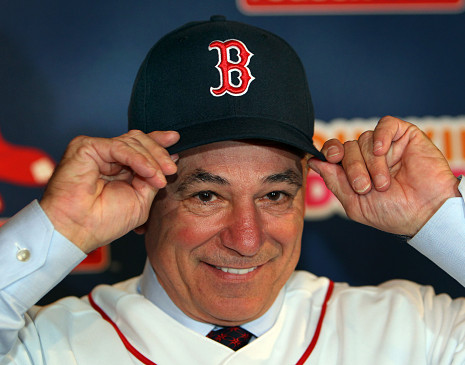 ﻿
﻿
ESPN -- Not wasting a moment to spice up the rivalry, new Boston Red Sox manager Bobby Valentine declared Wednesday how he feels about the New York Yankees. "I hate the Yankees," Valentine said while surrounded by a herd of media members at the Winter Meetings. "I don't want to waste this valuable time talking about the Yankees. This is too valuable." On Tuesday, Yankees manager Joe Girardi was asked what Valentine's presence would mean to the rivalry and was a little more diplomatic. "Bobby adds some spunk to his clubs," Girardi said. "No doubt about it. I didn't get to witness him first-hand a lot. But Bobby's been successful wherever he has went. It should be exciting." According to one major league public relations official, the media pack around Valentine was the largest one they had ever had for one of these sessions. Valentine's force of personality is one of the things he brings to the rivalry, making it different than when Terry Francona was the Red Sox manager. Valentine always makes people pay attention. He has already started the countdown to when the two teams first meet in the regular season, Friday, April 20, at Fenway Park.

You know what, Bobby? Learn to talk about the Yankees, they're the division champs - you're going to have to deal with them a little bit here and there, gonna be a lot a questions all season about if you're ever going to catch them in the standings. I'm so bored with this because it's so predictable, just typical Red Sox playbook. Immediately try and insult the Yankees, the classiest and greatest winning organization in sports history. Love the hiring of the biggest name out there even if all your players fucking hate him, why should they be happy anyway they're just the ones who do all the work and the same ones you depend on to win you games, no big deal. Hire a guy who's such a great manager that he spent the last decade in Japan and working for ESPN because he couldn't find work in the Major Leagues. 2012 should be fun. Way to try and fit in, Bob, the "I hate the Yankees" line is so fake and scripted at this point it doesn't even matter. It's like breathing in that city, people say that shit when they wake up. I don't even blame them - 27 World Series in NY and about the same number of epic fail collapses in Boston. I'd probably be waking up saying "I hate the Yankees - Ughhh what time is it I don't wanna go to school". It's like an involuntary twitch up there.

PS - Love how he has a countdown to the first time they play NY, meanwhile the Yankees are counting down to opening day in Tampa against the real AL East competition and focused on defending their AL East Division Title.
Posted by RP at 12/08/2011 08:47:00 AM