Huffington Post - The Chicago Sun-Times reports that Anthony Miranda approached a parked vehicle near 55th Street and Kenneth Avenue Friday night and asked the driver for a lighter before pointing a handgun at the man and demanding money. After the driver handed over some cash, Miranda reportedly ordered him out of the car -- which was apparently a mistake. Chicago Police Officer John Mirabelli told the Sun-Times what happened next: At some point, Miranda’s attention was diverted and the victim was able to grab control of the gun and the two wrestled. During the fight, Miranda accidentally discharged his gun, shooting himself in the ankle, Mirabelli said. The victim was then able to pin down Miranda until police arrived, Fox Chicago reports. He told officers he was a martial arts expert and ultimate fighting champion. Miranda was taken to Holy Cross Hospital with a "face full of lacerations," two black eyes and a gunshot wound. Miranda, 24, was charged with armed robbery and aggravated discharge of a firearm. He was ordered held on $350,000 bond Sunday, according to the Cook County Sheriff's Office.

Well that sucks. Out of the 3 million people you could've robbed in Chicago you go ahead and point your gun in the face of a UFC champion. Guess you win some and lose some. Probably shouldn't have gotten greedy, dude gave you his money but then you had to ask him to get out of the car.... Rookie mistake Tony, should've quit while you were ahead. Now you're left with a face full of lacerations and a hole in your ankle. Guess you just gotta take this one and learn from it, always ask if they're in the UFC first. "'Scuse me, sir? You fight in the UFC? No? GIMME YOUR FUCKIN' MONEY BITCH!" No harm in asking, right? Better than having your mugshot look like you have some sort of fucked up face condition. 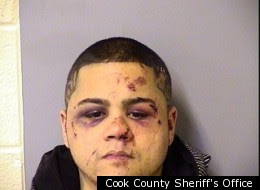 PS - No way this UFC guy who's name was failed to be published here just subdued this guy until the police arrived. I'm pretty sure he was busy getting absolutely worked on until they showed up. And yeah fuckin' right he Plaxico'ed his own ankle. Tried to run and UFC dude shot the tire out, then beat the fuck out of him for at least 10 minutes. Just a couple blows doesn't mangle a face like that, that takes time.﻿
Posted by RP at 12/06/2011 10:28:00 AM