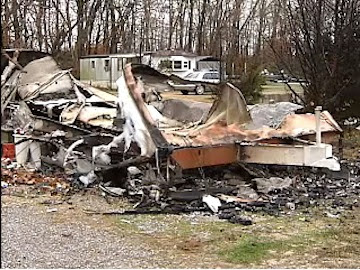 Yahoo - Vicky Bell told the NBC affiliate WPSD-TV that she called 911 when her mobile home in Obion County caught fire. Firefighters arrived on the scene but as the fire raged, they simply stood by and did nothing. "In an emergency, the first thing you think of, 'Call 9-1-1," homeowner Bell said. However, Bell and her husband were forced to walk into the burning home in an attempt to retrieve their own belongings. "You could look out my mom's trailer and see the trucks sitting at a distance," Bell said. "We just wished we could've gotten more out."

South Fulton Mayor David Crocker defended the fire department, saying that if firefighters responded to non-subscribers, no one would have an incentive to pay the fee. Residents in the city of South Fulton receive the service automatically, but it is not extended to those living in the greater county-wide area. "There's no way to go to every fire and keep up the manpower, the equipment, and just the funding for the fire department," Crocker said. The South Fulton policy produced precisely the same nightmare scenario last year, when homeowner Gene Cranick--who had likewise failed to pay the $75 annual fee for rural Obion County residents--saw his house engulfed by flames as South Fulton firefighter watched close by. That incident sparked a debate among conservative pundits over the limits of fee-for-service approaches to government. For his part, Mayor Crocker stressed that the city's firefighters will help people in danger, even those who haven't paid the fee. "After the last situation, I would hope that everybody would be well aware of the rural fire fees, this time," Crocker said.

I feel absolutely no remorse for this family of rednecks. When I read this headline I swear I said "Wait, isn't this old news? Like didn't this already happen?" And sure as shit it did and as fate would have it, it happened in the same fucking town! I mean how ignorant can you possibly get when not even a year ago your neighbors mobile house thing burns to the ground for the same exact reason? You know what? You don't pony up your $75 for the firefighters to save your shit, don't start crying when they watch it burn to the ground. And let's be real here, what priceless possessions did you really have crammed into that trailer home? Come on. Cut it out.