First of all, I can't believe it's week 13 already - shit is flying by.... As Darren McFadden sits on the bench... Things have slowed down after a blazing hot start for me, but things could be worse and I could pick like Mike so things are still looking up.. We all had good weeks last week, but this week I feel a little stronger about some games than others, I like what's on tap this weekend:


﻿ Seattle +3 - The Eagles are coming off a fucking embarrassing rout at home against the Patriots. They were up 10-0 and still managed to lose 38-20. They looked lost on defense and had no idea what to do on offense but throw the ball up for grabs. Desean Jackson is busy getting benched on a weekly basis, Rogers-Cromartie, Maclin and Vick are out and now Nnamdi Asomugha and LeSean McCoy are questionable. I just don't see a team getting up after a demoralizing loss to go cross country to play the Seahawks without half of their starters.


Green Bay -6.5 - Look, I'm a die hard Giants fan. Even I can't understand how this spread is closing and getting smaller. The fact it's not two touchdowns is blowing my mind. Aaron Rodgers is going to discount double check all over this spread, he barely throws incompletions let alone INT's and the Giants only weapon is their missing pass rush which I saw on a milk carton last week. They're starting 6th round draft picks and undrafted FA's at linebacker, so expect Jermichael Finley to have a huge day over the middle and Jordy Nelson and Randall Cobb to be running free across the middle all day. Not sure how the Giants figure out how to slow this offense down, let alone stop them. 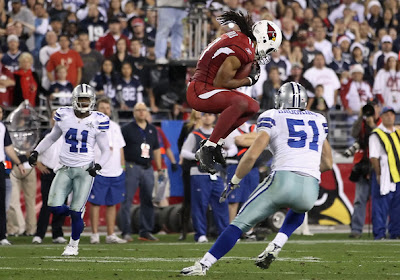 Arizona +4.5 - This is just going off of recent performances. In Dallas' last five games, they're 1-4 ATS - eeking out victories against Washington (OT) and Miami at home by 1 point. Arizona on the other hand is 4-1 in their last five, beating Philly on the road and narrowly missing a win AT Baltimore. They have a solid run defense which will be tough for DeMarco Murray to navigate and John Skelton is figuring out all he has to do is throw the ball to Larry Fitzgerald who should smoke Dallas' below average secondary.

Carolina +3 - Okay, I feel like we do this literally every single week. This is a game I feel Carolina will win straight up so even if they don't, Mr. Cover All The Time will make things happen.

Kansas City +8 - Look I know I consistently go against the Bears, but even WITH Jay Cutler, how is the spread this high? They have Caleb Hanie behind center. I also think the addition of Kyle Orton will help Kansas City decipher some of Chicago's calls - Ala Kevin Kolb in Philadelphia. There's just nothing to like about this game, two backup QB's going after it, but I like KC's pass rush - if they can keep a game close against Pittsburgh they can definitely keep it close against Chicago with Hanie back there.
Posted by RP at 12/01/2011 02:06:00 PM