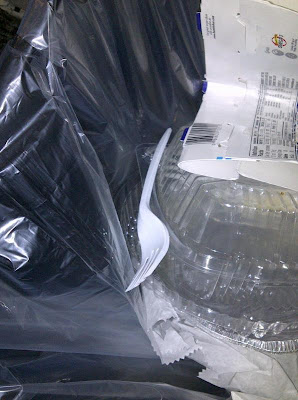 I used this fork for four bites. Then I threw it out. That's how much this fork sucked at its job. Just couldn't handle being used on food. So I got thinking, how much time did it take to go through the process of making the fork, packing the fork, shipping the fork, then waiting for the pack of forks this fork was in to be finally opened by the vendor and put on the counter, then waiting as his fork friends were picked up and put into bags to fulfill their dreams, then finally getting picked to be put in my bag and used by ME - the lover of all plastic utensils! He went to the guy who when he's at home refuses regular silverware just to use plastic because it doesn't make that scratchy noise on the plate and doesn't hurt when it accidentally hits my teeth, couldn't of been a better situation for this fork.... But it couldn't handle it. All the time spent waiting and waiting to be used, and it got through four bites. And because I'm straight and symmetrical like a boss I can only do things in even numbers, so he's lucky he got to four, because he should've been tossed at three. Must've taken months to finally get called upon, then four bites later he's in the trash. Pretty sad.
Posted by RP at 12/29/2011 08:40:00 AM