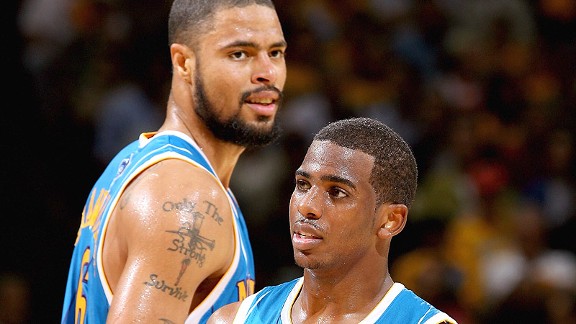 What is going on?? An hour ago I'm yawning wondering how I got to the point in my life I ended up in a cubicle then BAM Chris Broussard starts blowing up my Twitter feed about how the Knicks are about an inch away from signing Tyson Chandler. I swear last night I was saying I think the Knicks should try and sign him, but whatever. So I'm fucking pumped the Knicks are about to have a real man playing center so Amar'e and 'Melo can play their respective games without worrying about responsibilities they're not suited for. No more banging around and getting injured inside for Amar'e, no more doubles on 'Melo all game long on the outside.

But in signing Chandler, the Knicks need to cut Billups to shed salary - with the new amnesty clause, they don't take a hit cutting him and his $14M salary. Good shit. But who runs the point? We have a 3, a 4 and a 5, but no one else. Landry Fields at the 2? Tony Douglas at the 1? Okay, then who? No this doesn't work. BOOM all of a sudden more shit hits the fan - sources saying how bad CP3 wants to reunite with Chandler (See above picture) - but how's that happen? Knicks are signing Chandler for basically max money at $14M a year from what I'm seeing, and they'll have no room at all to take on CP3.... UNLESSSSSS .... Trade Amar'e for CP3?

I LOOOOVE STAT but holy shit that deal makes sense. I would hate to see him go after all he's done in his one year in NY, but it makes so much sense. Knicks with a top 5 PG, top 5 shooter in 'Melo, and the top 3 defensive center in the league? Yeah. If they could get Emeka Okafor with CP3 in that trade, this is a fucking no-brainer. The Knicks would be an immediate favorite for the NBA championship. Fact. Matter of fact, I'm placing money on them to win it all right now, before the odds go from 20-1 to 1-2! 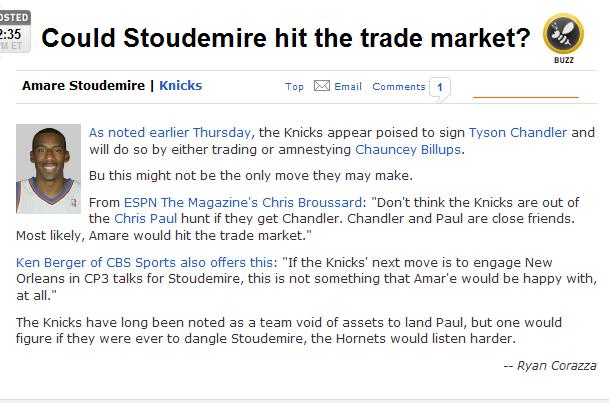