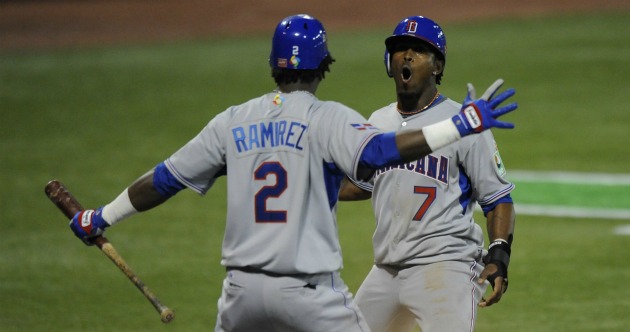 ESPN - The Miami Marlins and shortstop Jose Reyes agreed to terms on a six-year, $106 million deal Sunday, sources have told ESPN. The guarantee for the first six years totals $102 million, sources said. The deal includes a $22 million option for a seventh year, with a guaranteed $4 million. Reyes, 28, is coming off the best year in his career. He hit .337 for the New York Mets to win his first batting title. In nine years, all with the Mets, he has batted .292 with 370 steals and 740 runs scored. Earlier in the offseason, Miami offered Reyes a six-year, $90 million deal, which he rejected. Reyes' signing would mean the Marlins' All-Star shortstop, Hanley Ramirez, will have to change positions. Publicly, the Marlins are saying they haven't decided whether Ramirez would move to third base or center field. However, one source close to Ramirez told ESPN.com that Ramirez already has agreed to move to third base next spring.

I touched on this a little less than a month ago about how pathetic this would make the Mets look and somehow it's still surprising how bad they look right now. In return for losing Reyes, they get a 3rd round pick. That's absurd. How Sandy Alderson still has a job is mind boggling. I can't believe Bud Selig hasn't stepped in to take over the Mets franchise. It's almost like no one is running the team. Being friends with all Mets fans, it's sort of painful to watch this. Like I've said before, I could care less about the Mets and always find their mishaps absolutely hilarious - but this one takes it. I can't wrap my brain around it. A division rival just stole your franchise's best player and didn't even have to fight you for it. It's not even like they broke in middle of the night and stole him. They kind of just walked in, took his hand and walked out the door while staring you right in the face. Just mind boggling stuff. Miami is now trotting out a lineup with only 2 players who will be 30 years old on opening day (John Buck will be the oldest at 31). Two of the past three batting champions will now anchor the left side of the infield, and you have an absolute monster ace in Josh Johnson. As for the Marlins, they somehow always bounce back from the usual firesale of their roster with an unbelievably cheap, young cast of guys. Amazing way to run a franchise, maybe the Mets should take some notes....
Posted by RP at 12/05/2011 01:16:00 PM