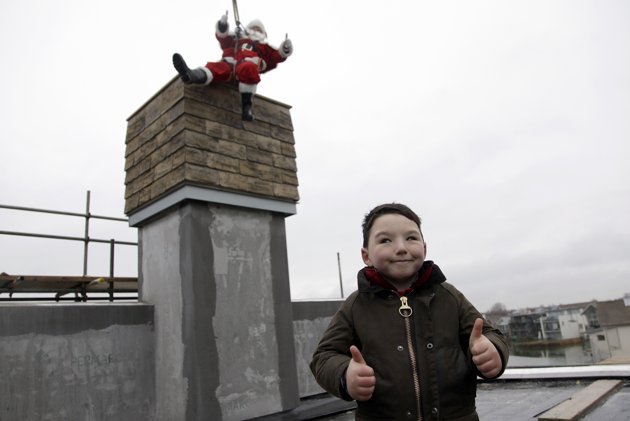 Reuters - A worried letter from six-year old Leo Park sparked a mammoth operation to test what is believed to be the world's first chimney specifically designed to accommodate Santa Claus. The little boy's parents are having a house custom built and when Leo viewed the plans he was concerned that the chimney wasn't big enough for Father Christmas and his famous belly that shakes when he laughs like a bowl full of jelly. As he was penning his traditional letter to Santa, Leo decided to also write a heartfelt missive about the chimney design problem to Jeremy Paxton, who owns the estate on which the new house is being built. In childish scrawl the letter reads: "Dear Mr Paxton, I am worried that my mummy's house does not have a big enough chimney. I think Santa Claus will get stuck. Please can you help. Love Leo Park." Paxton, founder and owner of luxury holiday home development Lower Mill Estate in the southwestern English region of the Cotswolds decided to commission a special formula to satisfy Leo's concerns. Obviously size was the key consideration to ensure Santa won't get wedged tight on his way to stuffing the stockings and so Paxton enlisted a mathematician to take on the challenge and save the jolly old elf from turning red for the wrong reasons. The Santa-friendly formula looked at risk factors of chimney entry, the size of St Nick's girth versus the width of the chimney at its narrowest point. To test what they said was the perfect chimney, Paxton enlisted the help of a stand-in Santa Claus in full padded outfit, a crane, a harness and winch to put the new chimney through its paces. Leo was invited to watch as the great experiment got underway. "Go on Santa" he shouted out as the faux Father Christmas was lifted into the air towards the chimney. A few seconds later and Santa was successfully lowered into the chimney of the half-built house, re-emerging shortly after to deliver a hearty: "Ho Ho Ho." "I can guarantee that this chimney is big enough for Santa and all the presents," he told Leo. An excited Leo gave a thumbs up to the St. Nicholas impersonator and rushed to hug him. "I'm absolutely delighted not just that Santa fitted into the chimney, but that that little boy, Leo, said to me: 'That was the best day of my life' which made the whole thing worthwhile," said Paxton. The Park family won't be able to inhabit their new holiday home until next December, just in time to get the milk and biscuits ready for their very special Yuletide visitor.

Look at this fat little bastard with his thumbs up like a dickhead. Hey buddy, Santa might not come this year, looks like you've been a little naughty with your nutrition. Maybe take it easy on the milk and cookies because you won't be fitting down that chimney anytime soon if you keep it up. I thought all these idiots from the UK were skinny? Don't they just shit on the US for being fat and eating all this crap and how all they do is drink tea and eat crackers and shit? Well take a look in the mirror you smug assholes - your kids are fat. And they still believe in Santa at 6 years old. This kid still in diapers, too? How about these fucking parents, huh? Oh sure son, we'll remodel our entire house so you can keep up this fantasy that some fat guy in a red suit flies around the world in 20 minutes and gives gifts to everyone on earth except people in North Korea. Kid was just set up for failure in life, thinking all he has to do is write a letter about how sad he'll be when a fictional character can't fit down a hypothetical chimney, it's okay though, everyone will stop what they're doing to make sure your fatso ass stays jolly.
Posted by RP at 12/21/2011 10:40:00 AM

Email ThisBlogThis!Share to TwitterShare to FacebookShare to Pinterest
Labels: Christmas