Pujols Makes Up His Mind And Like We Thought Goes To Anaheim - Wait What? 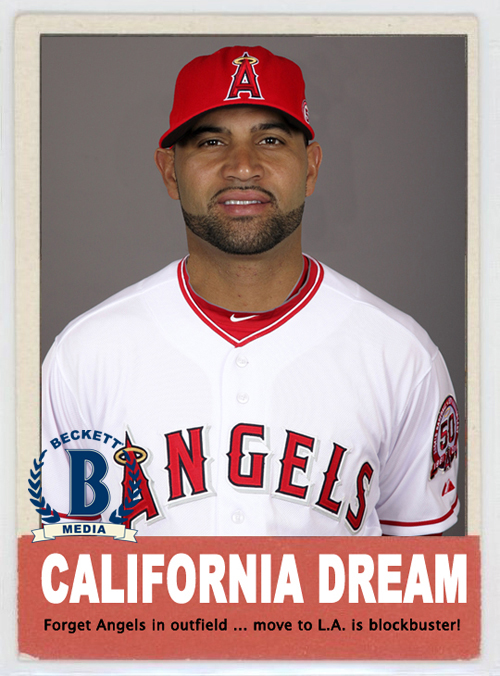 ESPN -- Albert Pujols has agreed to a 10-year, $250 million deal with the Los Angeles Angels, sources told ESPN The Magazine's Buster Olney on Thursday. The deal includes a full no-trade clause, which Pujols had been seeking and may have been a sticking point in his negotiations with the Miami Marlins. Pujols had turned down an offer from the Cardinals, the only team he has ever played for, about a year ago, but St. Louis was still in the bidding as of Wednesday. Sources told ESPN.com's Jayson Stark that the Angels jumped into the bidding late Wednesday. The Marlins moved on to pursue free agent pitchers Mark Buehrle (who agreed to terms Wednesday, pending a physical) and C.J. Wilson. But despite the Marlins' exit from the bidding Wednesday night, sources said negotiations with the Cardinals hadn't progressed to the point where Pujols was close to agreeing to a deal. The Cardinals had planned to talk with Pujols' agent one more time Thursday before heading home. But sources told Olney that the Cardinals' latest offer was for nine years and a little less than $200 million. That would have made him the fourth-highest paid first baseman.

Ummmm sorry St. Louis but I'm not sorry. You want to keep Babe Ruth on your team, you don't make him the fourth-highest paid first baseman, no sir. I'd LeBron your ass too if you offered me that, like a slap in the face. But this news definitely sucks, Angels are already the Yankees nemesis especially in the post-season - now we gotta deal with this fucking guy? Honestly thought we were safe here, but just an absolute power move by the Angels. They swoop in the last minute and just drop a Flex on 'em and boom deal is done. Albert asked for specifics, you give him specifics. That's how you catch the big catch, give the man what he wants. When you're negotiating over $200 million and you get held up on trade clauses in the contract you're an idiot. At that point you just hand it all over and make sure the deal is signed. Angels now have the best hitter in the game. Sucks that half way through his contract he'll be a DH and an absolute drain on your cap, but whatever.