Is This Little Bitch Kidding Me? 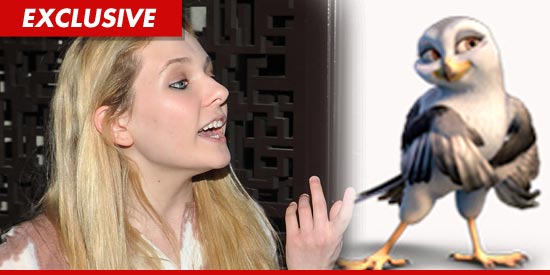 TMZ - Abigail Breslin's hourly rate is $16,250 -- at least when she's doing voice work for her new animated movie "Zambezia" ... this according to her contract for the film. TMZ has obtained 15-year-old Breslin's payment agreement with film producers -- and according to the docs, she earned a grand total of $65,000 for one 4-hour recording session ... voicing the character of Zoe, an adorable bird. It's not Abigail's only massive payday this year either -- back in May she signed a one-week contract for the upcoming movie "New Year's Eve" ... worth $275,000. What did you do when you were 15?

Is this a fucking joke?? This sluts voice is worth $16,250 dollars an hour?! FUCK. THAT. This bitch just doubled my fucking salary in half a day of work. What the fuck is wrong with this picture? What could she possibly be doing that I can't do? Want me to talk like a bird? You got it. I'll figure out how to hold a conversation with a Parrot in 4 hours if it means making $65k. And wait a fucking second, one week on a movie set - let alone a movie set including Jessica Biel, Michelle Pfeiffer, Halle Berry, Hillary Swank, Alyssa Milano, Sarah Jessica Parker AND FUCKING BON JOVI - and she raked in $275,000 for one week?! Am I missing something here?! Holy Christ I don't even wanna know what the A-Listers took in. Seriously how much money could they possibly have spent to make this movie? 100 trillion dollars? I know this is purely about me being bitter about being a meaningless nothing 28 year-old that provides nothing of value to the earth but there is no way this little bitch should be making that type of money and not me. I need to get into movies and doing voice overs like a motherfucker, because there's no way I don't CRUSH her in every scene and start taking in double that shit for 4 hours. Fuck this blogging shit I'm in the wrong industry.