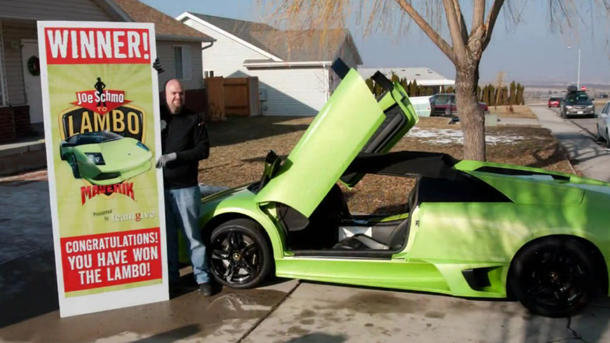 Yahoo - Just a few hours after getting the keys to the V-12 powered Italian supercar named for a famed Spanish fighting bull, David Dopp took to the roads around his home in Santaquin, Utah. According to In Santaquin News, police were called about dusk after a witness spotted the all-wheel-drive Lambo bass-ackwards in a field, with skidmarks from where it left the road. Dopp -- who had apparently already taken one call from the local police about takin' it easy before going off-road -- says he was going about 40 mph to 50 mph on a 35-mph road when he hit a patch of what he called black ice or gravel. The police report says the car went over a curb, off the road and 75 feet into the field, calling the accident "speed related."

This reminds me of the time I went and borrowed my dad's golf clubs when he was at work, and right before I close the door behind me my mom screams out "DON'T BREAK THEM!" And I immediately shatter the head on his 3 wood in a freak accident at the driving range. Obviously my intention was to go hit golf balls, not other clubs lying in close proximity to the tee and breaking them. I think Davey Dopp can relate here, I mean obviously he wasn't trying to drive a Lamborghini around ice covered Utah wanting to crash it just hours after he got it, so for the cops to warn him to take it easy is just like telling a pitcher throwing a perfect game that he's only got 3 outs left and he's been pitching super great and if he doesn't fuck up at all he'll have a perfect game. It's like an automatic jinx. So really, I blame the cops here, not the asshole who was ripping around Iceland, Utah in a brand new $200,000 Lambo.
Posted by RP at 12/21/2011 07:58:00 AM