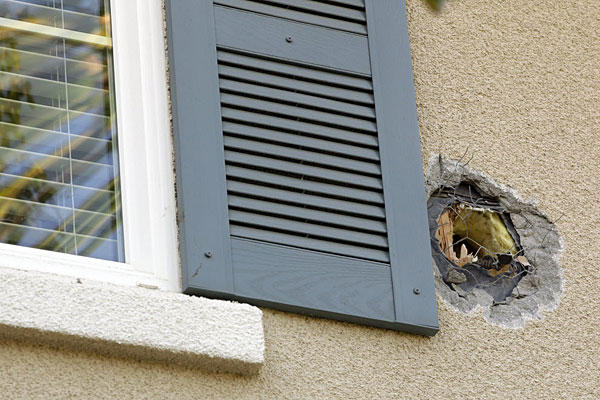 CSM - Zany experiments testing scientific theories in real-world settings have earned the TV show "MythBusters" a devoted following, but a stunt gone awry met with an unhappy audience when an errant cannonball went shooting through a California family's bedroom. Sheriff's deputies are still measuring how, exactly, the cannonball flew from a bomb range in the rolling hills flanking a suburban San Francisco Bay area neighborhood and rocketed into the front door of a home and through its master bedroom before landing in a neighbor's parked minivan. Hosts for the Discovery Channel show fired the cannonball Tuesday as they filmed an episode testing whether other types of projectiles shot from a cannon would pick up the same speed and have the same impact as the steel ball. Later, the production team plans to film flying stone cannonballs at a rock quarry in Northern California. Instead of hitting a string of water-filled garbage cans, however, the cannonball passed over the barrels, crashed straight through a protective cinderblock wall and careened off the hill behind it, said Alameda County Sheriff's Department spokesman J.D. Nelson. "It missed the target and took kind of an oddball bounce," Nelson said. "It was almost like skipping a rock on a lake. Instead of burying it into the hill it just went skyward." No one was injured, and the home's residents didn't even wake up until the broken drywall settled on top of them, Nelson said.

Well was the myth busted or not? I mean if you already shot a steel cannonball through this guys entire house, might as well fire the other shit through there too, right? How you gonna compare the rest of the shit now? Can't use a different house, not the same. Water-filled garbage cans? Give me a break. At this point if I'm the homeowner, I'm letting them just finish up - you'll get it all paid for, probably remodel your kitchen and bathroom at no extra cost - and your house is now THAT house that the Mythbuster nerds used in that cannonball episode. Adds at least $100 to the final asking price. Business 101.